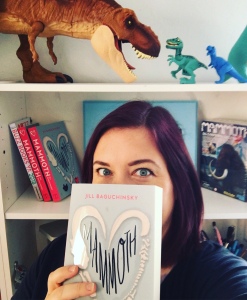 Wow, I can’t believe it’s already been an entire year since MAMMOTH was published! I’ve done signings and readings. I’ve seen my second bookbaby shelved in bookstores and libraries. I’ve even gotten to hear someone else read my words back to me as an audiobook (which is an absolutely surreal experience).

And while MAMMOTH has been more polarizing than I could’ve expected—let’s face it, there’s no universal way to tell the story of a character learning to love, respect and assert herself in the face of bullying, sexism, and society’s constant message that you’re not good enough unless you’re thin enough—I’ve heard from readers who saw themselves reflected in fiction for the first time, and that means the world to me. That was my ultimate goal when I first drafted this book. I wrote the character and the story I wish I could’ve read when I was in high school.

(Plus, I got to hang out with paleontologists and learn to dig for fossils! My inner child still isn’t over that.)

If you’ve read MAMMOTH—even if it wasn’t for you—thanks for giving it a chance. And if you did enjoy it, you might want to check out the bonus material I’ve posted to celebrate MAMMOTH’S one-year anniversary.

You can find more about MAMMOTH, including a summary, purchase info and content warnings, here.

Publishing’s a wild ride. MAMMOTH was no exception to that rule, and I can’t wait to do it all again.