Okay, so where were we? I took a little break to deal with Hurricane Irma cleanup (almost five months later, we’re still working on getting our roof replaced) and other life stuff. I’m still processing a lot of anxiety-related stuff (hurricanes and anxiety disorders are a fantastic combination), I’m catching up on a ton of reading, I finished a new rough draft during NaNoWriMo last November, and last week I helped one of my best friends move from Georgia to south Florida.

I’ve also been sitting on some super-exciting news, and now that the announcements have run in Publishers Weekly and Publishers Marketplace, I can finally share: my next novel, MAMMOTH, will be published in fall 2018 by Turner Publishing!

This book is so dear to my heart, and I’m so ridiculously anxious (in a GOOD way) to launch it out there into the world. MAMMOTH is a body-positive, science-geeky story about being true to yourself and letting your talents and ambitions shine. 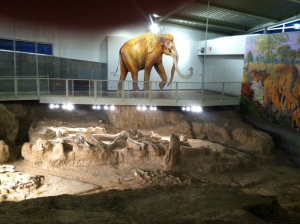 Most of the book is set at an Ice Age dig site; to get the paleontology angle as accurate as possible, I trained at the Waco Mammoth National Monument and learned to dig and prospect for fossils. I also interviewed paleontologists, toured a bone lab, practiced screen picking, and spent a particularly spectacular morning hanging out with a pair of elephants at Cameron Park Zoo. (Thank you FOREVER to my bestie Dava Butler, who works at Waco Mammoth, for making all that possible!) 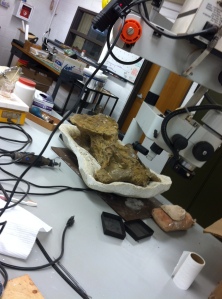 I wrote MAMMOTH in 2014. As I explained in an earlier post, my agent at the time didn’t connect strongly enough with it, and we parted ways in 2015. Finding new representation took some time, but Eric Smith of P.S. Literary was worth the wait. He began pitching MAMMOTH in May 2017, and after a few other close calls, we accepted an offer from Turner in December. You can read Eric’s post about MAMMOTH’S deal here.

I’m so jazzed to work with Turner, and so excited to share updates as MAMMOTH’S publication date approaches. Watch this space, my vintage velociraptors (as MAMMOTH’S Natalie would say) — there’s so much more to come. ❤